Alright dorks, have your mother turn down the t.v. upstairs so you can listen closely. This is the only truly well-designed superhero: 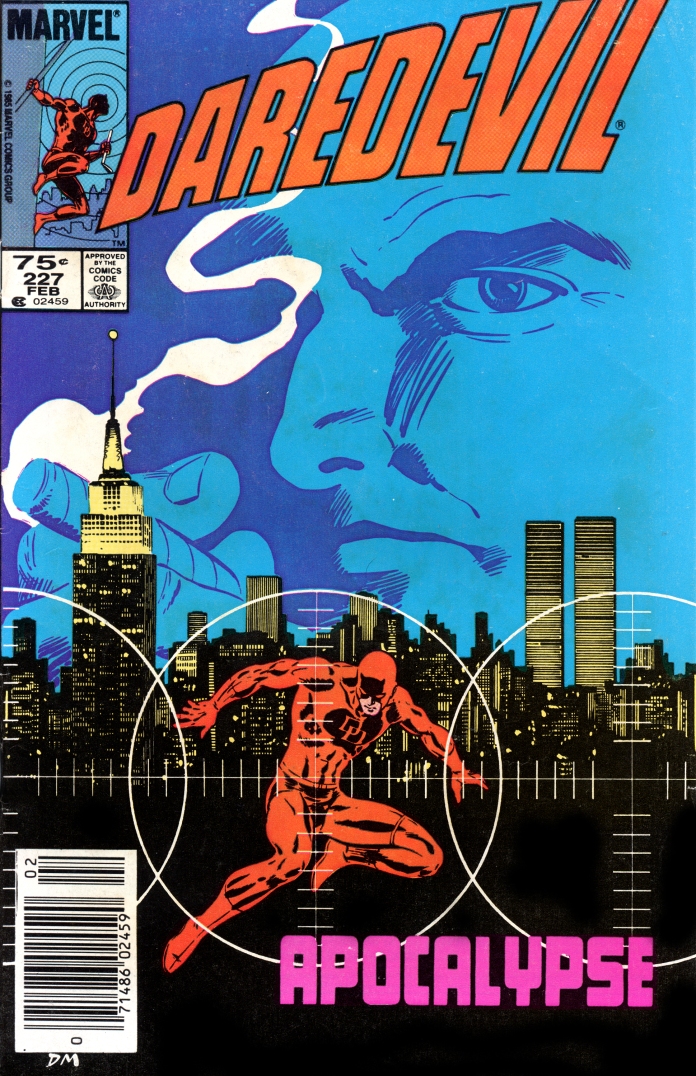 Yeah, I said it. Stop putting all those Wonder Woman comics you were “looking at” back in bags and boards and do something! Spam me! Flame me! Drag my name through the mud!

Spider-Man, you say? Not even. Hal Jordan Green Lantern? A leotard by any other name… Thor? Please, the Ultimates redesign deserves mention for making something of those silly giant buttons perhaps. Wolverine? No. Gambit? You’re kidding, right?

Yes, Daredevil is the only superhero who inherently looks great on the page (NOT the silver screen). You can’t screw that costume up. Minimalism with perfectly designed accessory and beautifully lettered, interlocking, alliterative Ds. The little details, like the slightly shorter than usual gloves and boots, referencing his dad’s wrestling career, the ever-so short horns, make it.

It was actually my mother who got me into comic books. I’m sure that had she known her son would be teaching classes in them as a grown man rather than working at a respectable law firm like his fellow Ivy League graduates, she probably would have chosen not to expose me to them. As it was, she still took her sweet time. You see, we lived at the bottom of a quarter of a mile long driveway. At the top of which, at the road, there was a large storage barn we referred to as the machine shed. My mother kept the hundreds of comics she had collected throughout her early adult life up there. When I was about six, she started telling me about her collection. I begged her to bring them down to the house, but they were trapped behind band saws, under pool tables covered with timber, or some such excuse, so instead she just described them to me. My talent for art was already burgeoning, so as she told, I drew, creating my own private Marvel-ous Universe. She told me of the X-Men (her favorites) and I began to draw a one-eyed man who shot lightning out of his face and a hairy long-haired beast with giant claws coming out of his fingers (she never could quite explain to my tiny self why they would come out of the back of his hands). I had Doctor Strange as some paisley hippie magician. Finally, after some cajoling, my father was able to convince her this was cruel to deprive me of something I was so invested in already, and he moved some large piece of machinery and brought home a box. I was hooked before I had even seen a single comic.

And Daredevil was the only character, by my admittedly biased and childish judgment, who turned out better than I had re-envisioned him. My version was truly demonic and lacked any eyes. I wondered how anyone would be willing to get invested in a horrifying hero like that. But the “real” deal was pretty slick. I loved the heck out of the cane/billy club gimmick. And the young artist in me, he who would never dare color out of the lines, must have appreciated that his eyes, gloves, belt, and boots wear separated by lines but not color. Even a kid thinks that’s kind of earth-shaking. I can’t even tell you how many times I re-drew that first cover there with my own superhero in the cross hairs and my own villain looming large in the background — but it never looked as good as Daredevil’s good old monochrome tights.

And which of your superheroes, might I add, has the chutzpah to pop the actual devil in his kisser like the latter? Vade retro me, Satana!

Of course, I didn’t know it then, but the reason for Daredevil’s design standing head and shoulders above the rest can be chalked up to his re-designer: Wally Wood. You’d be hard pressed to find a more stylish inker. That guys work just exudes slickness. It’s like watching an old movie with Carey Grant, Clark Gable, or Gregory Peck – sometimes you just feel like you have to take a breather because the guys are too pretty, too well-lit, too stylish. Wally Wood can make these schlubs look like the best-designed heroes under the sun, for god’s sake: 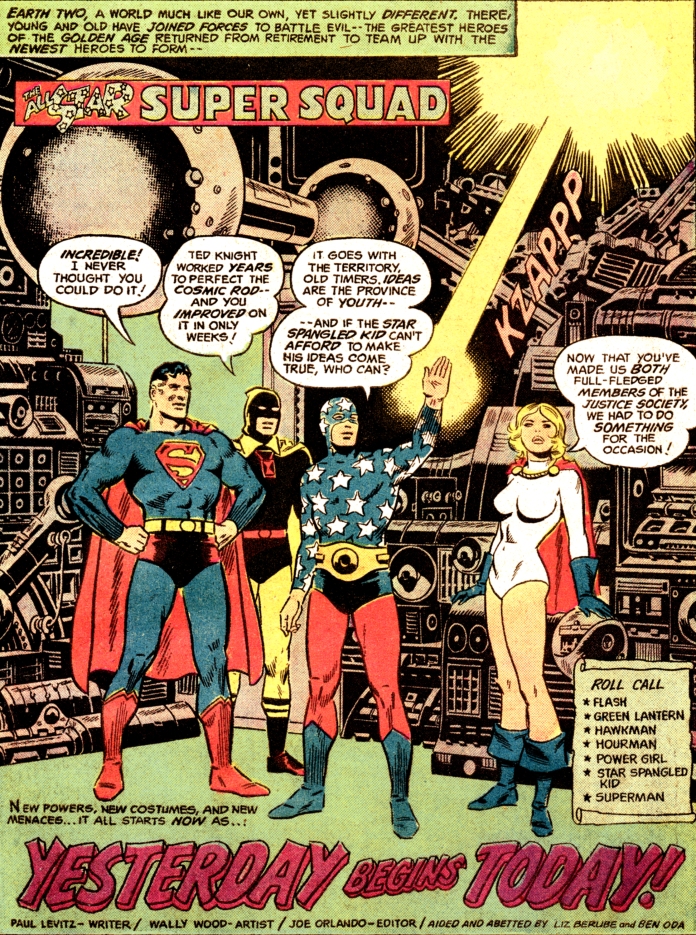 Is that Space Ghost in the back there? Toth, you ganker! One of those guys is named, I josh you not, the Star Spangled Kid. But Wood makes even doomed-to-failure ideas like that shine in their primary-colored garb like pop art masterpieces. Superman, hobbled with a downright terrible costume, hasn’t looked this good since the Fleischer cartoons. He’s looking pretty dang fine here thanks to squinty Dick Tracy eyes and graying temples. God, even the machinery is beautiful, to say nothing of Power Girl (va-va-voom)!

So let’s have it, fanboys! I challenge you to come up with one more superhero that looks great even when not drawn by a luminary like Wally Wood. Send me your names! Comment galore! Fight, fanboys, fight! Argue your cases! I’m honestly curious to know your thoughts.

And then I’ll elucidate why you’re wrong.