One afternoon in the summer of 1999, I found myself in Kichijoji sitting on the floor across from a respected manga critic (who will remain nameless) attempting to discuss my reasons for exploring the comic culture of Japan.  During most of these interviews, I came with a translator, but this man, I was assured by other Japanese-speakers via said translator, spoke perfect English.  I had come alone, and now found myself completely lost in a lecture that for all I knew had the depth of Hegel, but I was too busy struggling to make sense of the “perfect English.”  Switching to my FAR FROM PERFECT Japanese would have been less than useless and the height of rudeness.  So I sipped my tea and nodded, peppering pauses with “naruhodo” as I had observed my mentor do with me when floor tables were turned.  When I realized, at one point, that he was asking for names I admired, I replied, “Otomo Katsuhiro.”  He retorted, “You mean Akira, I assume.”  I was American, reading only the few manga that had been translated and ended up in the tiny comic shop I worked at in Caribou, Maine.  Of course I meant Akira.   Add Shirow Masamune to that list (another whose creations had found there way to popular anime features) and you had nearly the complete extent of my pre-Tokyo first-hand knowledge of manga.  “Yes, Akira is grand, isn’t it?”  I asked.

Now, again, my understanding of the exact words and minor points the man then explicated was minimal, but the brunt of the argument came through loud and clear:

A 2000 page, multi-volume epic addressing the atom bomb, telekinesis, and body distortion horror that would make Cronenberg salivate, filled with mind-blowing art was “boring”?  Who was this pompous tool?  His mustache began irking me even more than before.  “You think it’s uninteresting?”

“It’s drivel.  Childish wish-fulfillment trash.  It’s such a shame that he turned his back on creating something meaningful, because his early short stories showed such potential.”

I left the man’s house angry, muttering to myself under my breath about “perfect English,” ashamed at my own pitiful command of his language, but worse, ashamed that perhaps my very love of this medium, one that I was busy purporting to all who would listen was an Art form, was juvenile and adolescent.  I vowed I would prove this uptight, stick-in-the-mud pedant wrong.  I hopped a train to Mandarake rather than going straight back to my host home as I planned and hunted down a collection of Otomo’s early work entitled Short Peace.  The initial flip-through showed just what I expected: autobiographical sketches that lacked any of the ambition or formal innovation I had come to love.  A story with the length, breadth and character count of a Russian novel was somehow wasting this potential?!?  Because sometimes they move things with their minds?!?  Ha ha.  Score one for the undergraduate art student foreigner.  Wrong, sir.  Wrong.

I was on the train home when I found this hidden towards the end of the book (I have flipped this through the magic of Photoshop, so the direction of the read is American.  Sound FX are still mostly backwards, as that is haaard.): 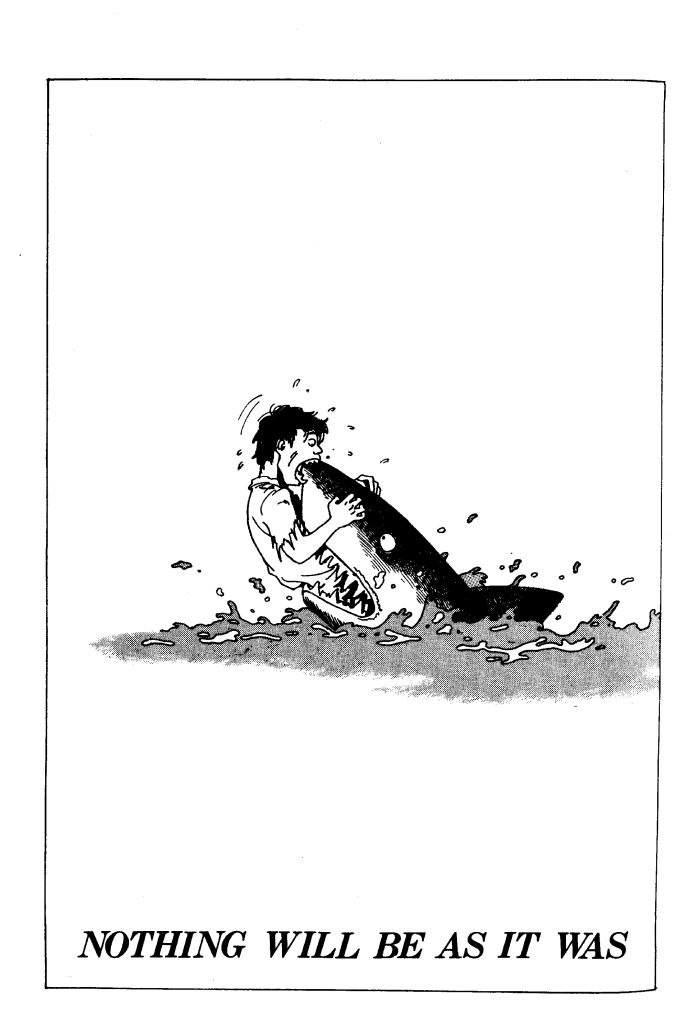 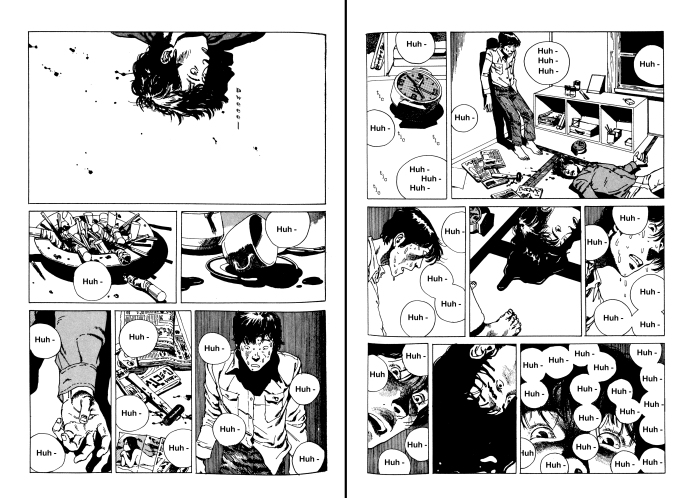 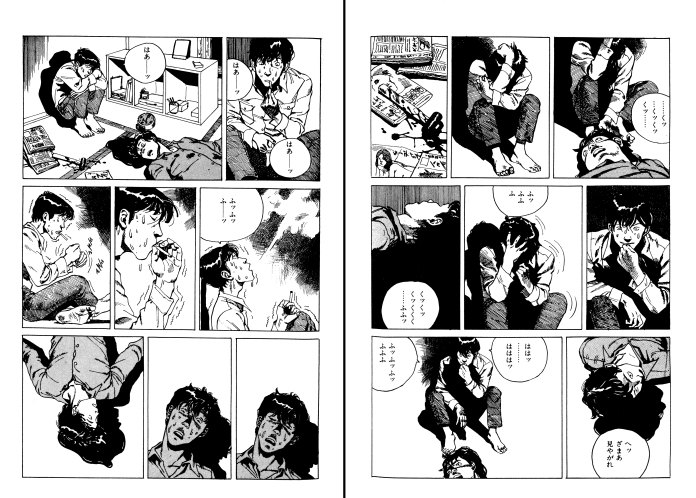 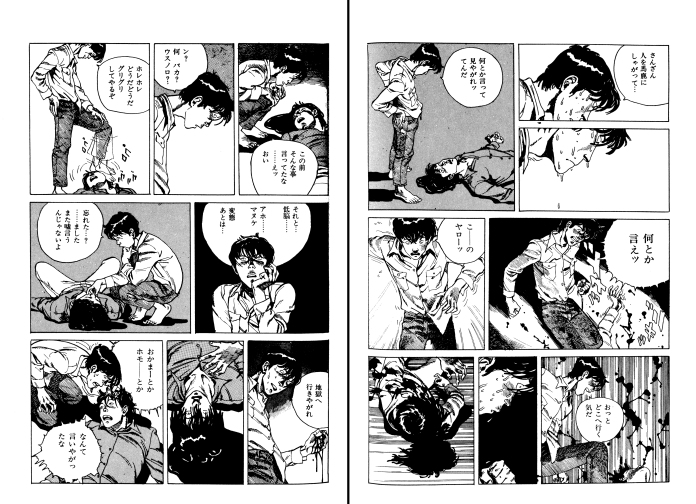 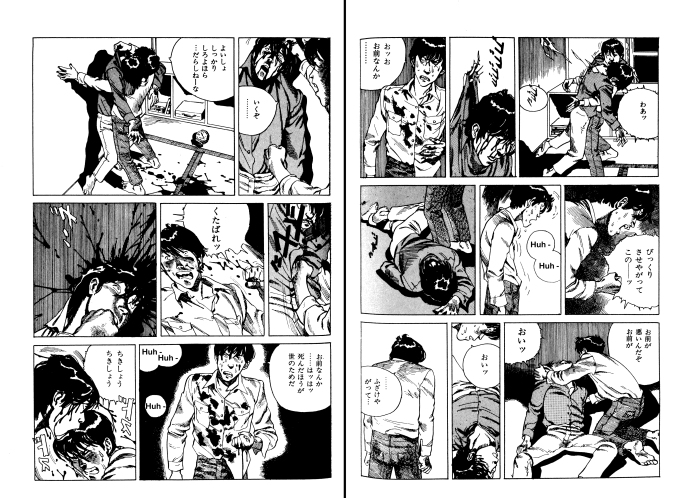 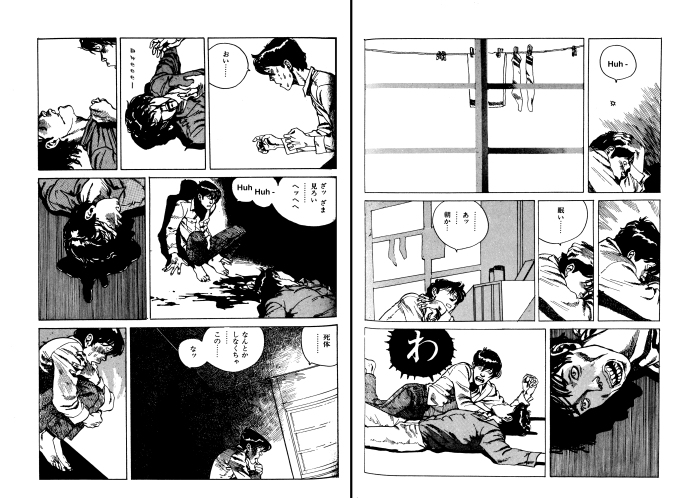 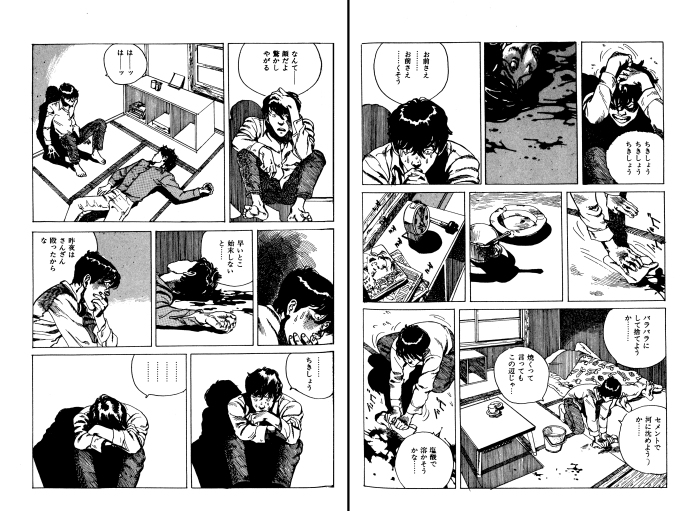 This was probably not the sort of piece to which the critic had been alluding.  I would guess he would find horror to be just as automatically worthless as sci-fi.  A genre seemed to be a genre in his book.  (I wonder where MacBeth falls?  A Midsummer Night’s Dream?  Oh, I’m being simplistic.)  And to be fair, my Japanese has never been even close to good enough to allow me to actually read any of these stories.  For all I know, the other stories in this collection have words that give them the insight of Chekhov.  But the pictures are just of people standing around talking.  The layouts are unremarkable.  The linework is clean but predictable.

I had a film teacher who insisted that she should be able to shut off the sound on our videos and still find them compelling.  I wholeheartedly agree.

I have never championed comics as literature.  I feel viewing them as such and asking their contents to adhere to the rules and standards of what works in fully-text novels leads one to look at some pretty dull comic books.  I leave discussions of our young medium’s literary merits to others.  There are certainly some stories that have risen to that challenge, but I teach English literature.  I cannot seriously argue that the story of any issue of X-Men, or just the story of any Adrian Tomine short, moves me in the same way as those of James Joyce or Flannery O’Connor or Ivan Turgenev, that it deserves the same analysis and depth of thought.

But I have, and I continue to argue through this blog, that comics, by virtue of being a collection of lines on a page adding up to form, are art.  And in the hands of a master feeling his oats, are even Art.  And we should view them through this lens.

The appeal of the other comics in this collection, if there is one, must reside in their words and the story those create.  As such, they are like films with bad lighting and pat cinematography: formally flawed.  Despite what some will try to argue, good art cannot possibly hurt a good story.  It is not a distraction.

On the contrary, the above piece proves that innovative artwork and storytelling (which is achieved in comics via art) can heighten a simplistic genre (groan) story to the level of a masterpiece.

Over the course of these pages, the minimal story is abundantly clear.  A man killed someone who was probably a former friend, freaks out, and then eventually begins to clean it up.  By the end of the story, which I did not include, he has become comfortable enough with this whole deal as to be eating him.

No, a better point of reference would be the much-loved by tortured teens Poe.  The execution here has “Tell-Tale Heart” written all over it.

The first two page spread puts us inside the murderer’s mind and as such is absolutely unbearable.  This is accomplished by way of McCloud’s aspect-to-aspect transitions and sped up by including many panels per page and peppering it all with the killer’s heavy breathing.  It becomes hallucinatory.  The aspect transitions make perfect sense because in a split second we did not witness, this man’s entire world changed.  It is as if he is scanning the room, looking for a sign of this momentous shift, wondering if the sky is about to open up and smite him.  Instead, the perfectly repeated dialogue hammers home that the world is the same, it will not vanish, and thus there is no escape.  We can barely make out his face by the last panel on the spread, so trapped behind his own breath.

And placing the friend’s head upside down is such a brilliant move.  It allows for the blood to run down from it in future panels, but since the initial violence was not shown, it also gives a slow reveal to what has actually happened.  It indicates something is off here, but what that is only becomes clear as we piece together the bits of the surroundings.  The spilled coffee is rightly suggestive of blood.  The bloody hammer a tier later let’s us in on it, so when the head reappears on the next page slightly tilted, we are not surprised at all that a river of blood is flowing from it.

This inverted head shot keeps repeating throughout the course of the scene; it’s changes mark time for us.  Otomo’s art is so subtle that towards the end we can make out stages of decay, shrinkage, and rigor mortis in the shot.  This shows us better than the clock that this tormented killer has been sitting far too long with this corpse.

This scene is visual poetry, and that sort of repetition reminds me, appropriately, of this poem:

He clasps the crag with crooked hands;

Close to the sun in lonely lands,

Ringed with the azure world, he stands.

The wrinkled sea beneath him crawls;

He watches from his mountain walls,

Technically, this piece by Alfred Lord Tennyson called “The Eagle” is a fragment, but I’m not sure he could have made a better poem with more.  The comparison I would like to make here is one of construction.  I draw your attention to the last lines of both stanzas.  In the first, all potential energy and mounting power, “he stands.”  At the end, as the eagle, familiar of Zeus, dives like a lightning bolt, “he falls.”  There is another faint echo in the lines implying nature’s subservience to him, the “sea…crawls.”  These verbs place the poem and give it it’s tension and power.  This would not be discernible if they were dressed up and hidden.  The starkness of their words, placement, and repetition allows them to reverberate with one another.  Their echoing motif helps us navigate the poem.

Otomo does the same thing visually here.  From the breaths, to the upside down head shots, to the crouching killer panels, to the standing profiles that frame pages six and seven, to the layout choices — everything is repetition.  We understand the subtle, and not-so subtle, shifts in the killer’s mind because we have reference points we return to which anchor the scene.  The murderer moves through the Seven Stages of Loss (adding a final one, 8. Mastication) violently and unpredictably, up and down the scale and back again, and we can track this thanks to those visual motifs.

The lack of symmetry on any page keeps us as off-balance as he.  The fact that vertical gutters never form a line between tiers also keeps us constantly shifting.  We are given nothing stable to cling to aside from those horrific repetitions.  Only the beautiful wide shot of the light through the window gives us that stability we lacked: it is symmetrical and implies the nice, comfortable Kirby six panel grids that are so absent.  Appropriately, it is that same cold light of day that is the turning point.  The only symmetry comes at the bottom of the penultimate page of this selection.  The killer’s head is buried in his knees deep in contemplation, and then it rises in acceptance.  “He stands/He falls” has become “He hangs/He rises.”  The unwelcome light and contrasting simplicity leads the narrator to the conclusion he had to eventually reach: Well, I guess I’d better clean this mess up.